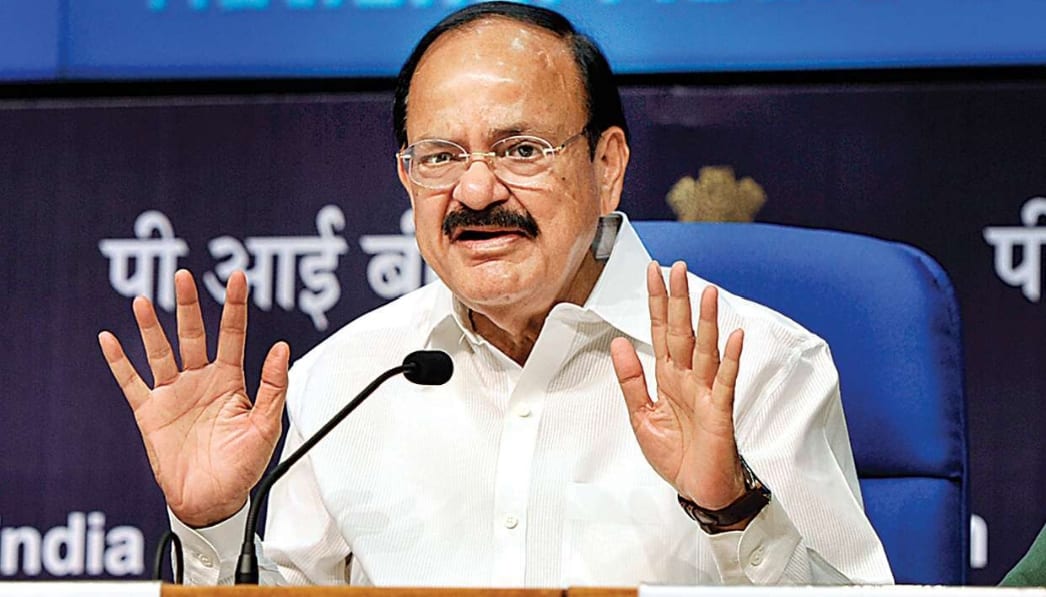 The Vice President, Shri M Venkaiah today called for making justice accessible and affordable to all and cutting down delays in courts.

He said the focus of the Union Government and States should be on filling up judicial vacancies and creating requisite infrastructure. The cost of the legal process should not become an impediment to the common man’s access to the justice system.

The Vice President stressed that faculties of law universities have to play a key role in training students to become change agents and bring about a transformation in the administration of the justice system in the country.

Observing that the Preamble of the Constitution reflects the overarching vision of our freedom fighters, he said “we have solemnly resolved to constitute India into a sovereign, socialist, secular, democratic republic and to secure to all its citizens: Justice, Liberty, Equality and Fraternity”.

Referring to the strides made by the country in different fields since Independence, the Vice President said that we cannot rest on our past laurels. He said the time has come for a massive national movement on the lines of the freedom struggle to eliminate poverty, gender discrimination, illiteracy, casteism and corruption, among others.

Cautioning against attempts by forces inimical to India to create divisions in the name of religion, region, language or other issues, he urged the youth to be at the forefront of this national campaign to transform the lives of the people and contribute their might towards building a strong, prosperous, healthier and happy India.

On the occasion of the birth centenary celebrations of Shri DamodaramSanjivayya by the University, the Vice President paid glowing tributes to him. He said that Shri DamodaramSanjivayya is remembered for his honesty, integrity and commitment to serving the nation selflessly. It truly is an honour that this university is named after such a great son of India, he added.

The Vice-Chancellor of the university, Prof. (Dr.) S. Surya Prakash, Registrar, Prof. (Dr.) K. Madhusudhana Rao, faculty and students were among those present on the occasion.

Following is the full text of the speech –

“It gives me immense pleasure to participate in the inauguration of “Azadi ka Amrit Mahotsav’’ celebrations today.

I am told that the university is celebrating the Centenary of Sri DamodaramSanjivayya, a lawyer, freedom fighter and the first Dalit Chief Minister in India.

Incidentally, he was the youngest Chief Minister at that time. He also served as the Minister of Labour in the Shri Jawaharlal Nehru’s Cabinet. Sri Sanjivayya is remembered for his honesty, integrity and commitment to serving the nation selflessly. It truly is an honour that this university is named after such a great son of India.

It is doubly auspicious for the university that you are celebrating ‘AZADI KA AMRIT MAHOTSAV’ and Sri DamodaramSanjivayya Centenary Celebrations at the same time.

‘AZADI KA AMRIT MAHOTSAV’ marking 75 years of our independence is not only a time for celebration but also an occasion to recall the struggles and sacrifices of all the celebrated and unsung heroes of our freedom struggle and to pay tributes to them. As you know, we have a wonderful living document i.e., ‘Constitution of India’ which guarantees our fundamental rights enforceable through courts.

It says that it shall be the duty of every citizen of India (a) to abide by the Constitution and respect its ideals and institutions, the National Flag and National Anthem; (b) to cherish and follow the noble ideals which inspired our national struggle for freedom. Hence, it is not a mere moral obligation but a constitutional duty to cherish and follow the ideals that inspired our freedom struggle.

It is also pertinent to mention here that our leading freedom fighters were from the legal profession, including Mahatma Gandhi, Sardar Vallabhbhai Patel, Jawaharlal Nehru, Dr B R Ambedkar, Sir Tej Bahadur Sapru, Babu Rajendra Prasad, Andhra KesariTanguturiPrakasam and many others.

It should be remembered that the fundamental rights and freedom enjoyed by us today are the results of the innumerable sacrifices made by many known and unknown freedom fighters. They could not enjoy liberty and freedom under the colonial rule but sacrificed their lives to ensure a bright and great future for all of us.

Please remember that the ultimate goal of our freedom struggle was to secure justice to the people of India from an oppressive colonial rule. The Preamble of Our Constitution reflects the overarching vision of our freedom fighters. In the Preamble, we have solemnly resolved to constitute India into a sovereign, socialist, secular, democratic republic and to secure to all its citizens: Justice, Liberty, Equality and Fraternity.

The faculties of universities like this have a key role to play in training the students to become change-agents and bring about a transformation in the administration of the justice system in the country. We not only need to come up with ways to address delays in the justice system but must also ensure that justice is accessible and affordable to all.

The cost of the legal process should not become an impediment to the common man to access the justice system. We need to find ways to address huge pendency and inordinate delays in courts as timeliness is crucial to rendering justice.

While fully leveraging alternative dispute redressal mechanisms, there is a need to avoid frequent adjournments of cases. Information Technology should also be optimally used to ensure speedier justice to the people.

India that is Bharat is one of the most ancient civilizations in the world. The other ancient civilizations in recorded history like those of Egypt, Greece, Mesopotamia and Sumeria did not survive due to a variety of reasons. However, we find a thread of continuity in Indian civilization from the ancient times down to this day, because of the richness of our culture, sweep and depth of philosophical thought and our timeless customs and traditions.

India has been a victim of invasions from the Greeks to the British. Several waves of invaders committed atrocities beyond description in multiple onslaughts on India.

We know that the British came here as traders. The East India Company was formed and on August 24, 1600, the commercial ship named ‘Hector’ dropped its anchor in the western port of Surat.

The British traders started their business in a modest way with the Imperial Firman of the emperor Jahangir authorizing the East India Company to open depots north of Bombay. In the next 200 years, they colonized India and established their rule. As they say, the rest is history.

The history of the loot and plunder which the British indulged in, can never be forgotten. From the Battle of Plassey in 1757 till 1947, the British adopted the policy of divide and rule and drained India’s wealth.

In the early 20th century, the momentum for independence picked up with the arrival of Gandhi Ji from South Africa.

As you all are aware, the freedom movement had witnessed two streams. The most popular was led by Mahatma Gandhi and was supported by the moderates, who believed in adherence to non-violence. At the same time, many youth took up arms and joined revolutionary parties. The infamous Jallianwala Bagh massacre on 13th April 1919 was a turning point in the country’s freedom struggle.

Ultimately, Gandhi Ji’s non-violence, the armed rebellion by revolutionaries and the martyrdom of thousands of freedom fighters paved the way for India’s independence and forced the British to leave the country. Of course, it was not before the country had to go through the painful horrors of partition.

Nearer home in this region, there were many stalwarts– from the great revolutionary Alluri Sita Rama Raju to GouthuLatchanna, who fought valiantly against the British and inspired the masses to rise in revolt against the foreign rule.

Today, we have memorials for thousands of our freedom fighters in every nook and corner of the country. I urge our countrymen, particularly youngsters, to visit them, pay their tributes and seek inspiration from the indomitable courage and valor displayed by our freedom fighters. The memorial of Alluri Sita Rama Raju, who laid down his life at the age of 27 years, is situated near Narsipatnam, very near to your university. I would urge students to visit it and draw inspiration from the life and sacrifice of this great son of India.

As we celebrate 75 years of India’s independence and the strides made by the country in different fields from agriculture to space, we need to remember that we cannot rest on our past laurels. As the poet says, there are miles to go before we sleep. The time has indeed come for a massive national movement on the lines of the freedom struggle to eliminate poverty, gender discrimination, illiteracy, casteism and corruption, among others.

We need to draw inspiration from our freedom fighters and ensure that there is no compromise on protecting the unity, integrity and sovereignty of the nation.

Our economy is well on the path of revival as we slowly recover from the devastating impact of the COVID-19 pandemic that has wrought havoc all over the world.

The future of this great nation depends on the young generation. The people of the country, particularly, the youth should guard against attempts by forces inimical to India to create divisions in the name of religion, region, language or other issues. I urge the youth to be at the forefront of this national campaign to transform the lives of the people and contribute their mite towards building a strong, prosperous, healthier and happy India.

I appreciate the initiative taken by this University to celebrate Azadi Ka Mahotsav and reawaken the spirit of patriotism among the students.

Tax Research Unit of Department of Revenue, Ministry of Finance has issued a circular in which it has invited suggestions…