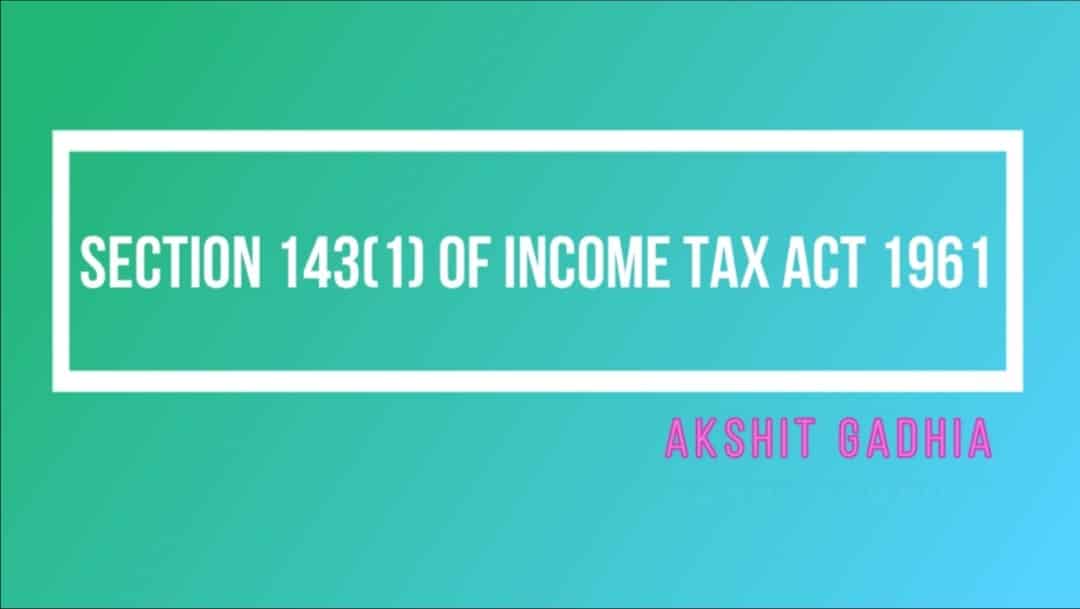 The preliminary assessment is wholly computerised and does not have any human intervention and is delegated to Centralised Processing Centre (CPC).

Initial processing of returns by CPC is completely automated and Section 143 (1) Intimation is also computer-generated record. CPC validates data provided in each tax return with details available with income tax department’s own record (such as form 26AS generated through details provided by collecting banks, form 16, TDS returns etc) and this notice
usually only points out apparent mistakes found out by the mainframe system.

We need to understand the process done by department after return filing completed.

Once the return is filed, total income or loss is recomputed by the computerised system as per the department’s record and provides a comparison with data filed by the taxpayer.

The intimation has two columns: ‘As provided by the taxpayer in the Return of Income’ and ‘As computed under Section 143 (1). Comparison is made for major categories such as (1) income under various heads, (2) Gross Total Income, (3) Deductions under Chapter VIA and (4) tax deducted at source and tax payments by taxpayers in the form of advance tax and self-assessment tax.

Appropriate adjustments are made to income as computed under Section 143 (1) and final tax liability or refund is arrived at.

The adjustments are carried out only after giving an intimation to the taxpayer of the proposed adjustments either in writing or electronic mode i.e., to the email id provided in the income tax return filed.

Response received from the taxpayer within 30 days from the issuance date of intimation will be considered before making the final adjustment and in case no response received within such period, adjustments arrived at initially will be incorporated.

An intimation shall be prepared and sent to the assessee. Intimation of such kind can be received by assessee

Time Limit: Section 143(1) intimation has to be sent within one year from the end of the financial year in which return is being filed. However, if a taxpayer does not receive any intimation within such period, it simply means there are no adjustments carried out to the return filed by the taxpayer and no change in tax liability/refund and acknowledgement filed itself is deemed to be Section 143(1) intimation

Total income or loss is computed under Section 143(1) after making the following adjustments:

Any communication from the income tax department creates panic for taxpayers. However, Section 143 (1) intimation is not something one needs to worry about.

read also What is TCS?