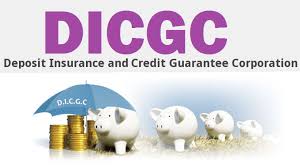 Everyone believes that a deposit with a bank is very safe and risk free.

What made the people believe so?

Its none other than — DICGC

To contribute to financial stability by securing public confidence in the banking system through provision of deposit insurance, particularly for the benefit of the small depositors.

It is mandatory for every commercial bank, RRB, Co-op Society to get insured with DICGC as soon as they get their licence from RBI as per their respective governing acts (Banking Regulation Act, 1949, Regional Rural Banks Act, 1976)

Central Govt has got the power to approve DICGC to raise this limit.

All types of deposits except –

Similar to CA Exams, the premium will be paid in Every May & November

Effect of Cancellation on Depositors:

Deposits received by the bank till the date of cancellation remain covered.

In the event of the winding up or liquidation of an insured bank, every depositor of the bank is entitled to payment of an amount equal to his deposits subject to the ceiling amount of Rs. 5,00,000.

Thanks for reading “DICGC – A Depositor’s Confidence“

You can also submit article by sending to taxconcept4@gmail.com

While auditing the statutory payments, the foremost thing we focus on is whether the EPF & ESI contributions of employees…