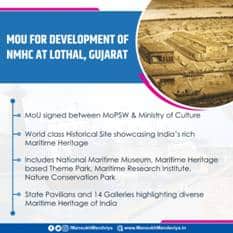 The Union Ministry of Ports, Shipping and Waterways (MoPSW) and Ministry of Culture (MoC) have signed a Memorandum of Understanding (MoU) for ‘Cooperation in Development of National Maritime Heritage Complex (NMHC) at Lothal, Gujarat’ today. Union Minister of State (I/C) for Ports, Shipping and Waterways Shri Mansukh Mandaviya and Union Minister of State (I/C) for Culture Shri Prahlad Singh Patel were present during the MoU signing ceremony held at Transport Bhawan, New Delhi.

National Maritime Heritage Complex, a world-class facility is to be developed in the vicinity of the ASI site of Lothal, located about 80 kms away from Ahmedabad, Gujarat. NMHC would be developed as an international tourist destination, where the maritime heritage of India from ancient to modern times would be showcased and an edutainment approach using the latest technology would be adopted to spread awareness about India’s maritime heritage. For developing the project, the land transfer formalities have been completed and all land related clearances including environment clearance are in place.

The unique feature of NMHC is the recreation of ancient Lothal city, which is one of the prominent cities of the ancient Indus valley civilization dating to 2400 BC. Apart from that, the evolution of India’s Maritime Heritage during various eras would be exhibited through various galleries. NMHC would have a pavilion for each coastal state and union territories to showcase the artifacts/maritime heritage of the respective states and union territories.