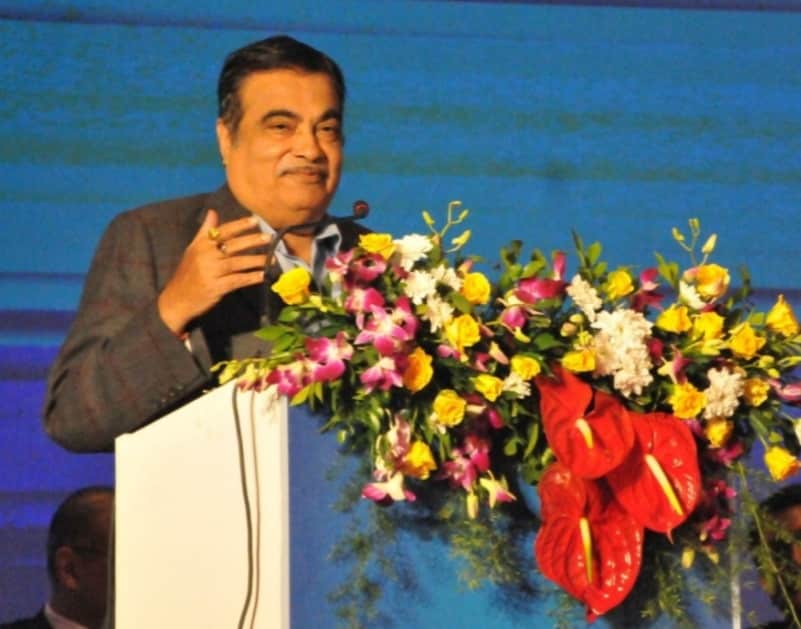 Addressing the National Conference on Investment Opportunities in Highways, Transport & Logistics in Mumbai today, Shri Gadkari said “the Internal Rate of Return in the road sector is very high and hence there is no need to worry about economic viability”.

Shri Gadkari said, earlier, projects used to get stalled due to land acquisition issues.  But we decided, project will not be awarded before 90% land acquisition is complete and environment clearance is obtained.  Citing various other steps taken by his Ministry to speed up road infrastructure projects, the Minister said “Keep your confidence 110%’

The Minister also spoke about the many benefits of upcoming projects under the Bharatmala Programme. “The travel time from Mumbai to Delhi, via road, will go down from 48 hours to 12 hours within one year; road projects and multimodal infrastructure projects will reduce logistics costs and boost manufacturing, increase exports and help the economy grow,” he said.  Bharatmala Project is the umbrella flagship program for national highway development with focus on improving efficiency of freight and passenger movement along with development of allied infrastructure projects.

The National Conference informed investors and other stakeholders that the Union Ministry of Road Transport and Highways has planned to execute infrastructure projects worth Rs. 7 lakh crore in the next 2-3 years itself.

The Minister also spoke about the benefits of the Vehicle Scrapping Policy of the government. “This will reduce pollution, improve tax revenues, help growth of automobile sector, boost exports and also create jobs,” he said. “It is a win-win situation, in which investment on high scale can come in,” he added.

Speaking about the transformation the Vehicle Scrapping Policy will usher in, the Shri Nitin Gadkari said: “Vehicle Scrapping Policy will reduce pollution, improve tax revenues, grow automobile sector, boost exports and create jobs. It is a win-win situation, in which investment on a high scale can come in.” The Voluntary Vehicle-Fleet Modernization Policy aims to create an ecosystem for phasing out of unfit and polluting vehicles.   Under the policy, around 50-70 Registered Vehicle Scrapping Facilities (RVSFs) will be set up across the country during the next 5 years to cater to the expected demand for scrapping of unfit vehicles in a safe manner.

The Minister said the automobile industry in India which is worth Rs 7.5 lakh crore in size will double to Rs 15 lakh crores in next 5 years.   Speaking about electric vehicles, Shri Gadkari said “we are issuing an advisory on Flex Engines, in two-three years, our vehicles will get converted into electric vehicles. Running cost of electric vehicles will be similar to or less than vehicles run on petrol.”   He also stressed upon alternative fuels like ethanol and asked Maharashtra Transport Department to launch ethanol-driven auto rickshaws in Pune, which already has three ethanol dispensing stations.  “Encouragement to alternative fuels will ultimately help the scrapping industry as well”, the Minister added.

Speaking about Asset Monetization roadmap, Shri Gadkari cited the example of Mumbai – Pune Highway, which has brought higher rate of returns to the state and the government. “Reliance had quoted Rs 3,600 crores for the project. However we decided to build it through MSRDC in Rs. 1,600 crores. Later on Maharashtra government monetized it for Rs 3,000 crores and just recently the same project was again monetized for 8000 crores,” he explained.

The Secretary, MoRTH Shri Giridhar Aramane informed that an integrated plan and coordinated implementation of all infrastructure facilities is getting a boost through Gati Shakti programme. “We are doing scientific Logistics Effectiveness Studies to understand bottlenecks in infrastructure projects. To remove bottlenecks, NHAI has identified 120 congestion points across the country; ring roads and bypasses are being built to reduce congestion in cities. After connecting all state capitals with at least four-lane National Highways, now we are planning to have expressways connecting all important economic centres of the country.”

The Secretary explained how improved policies and decision making has led to a tangible improvement in outcomes. “In order to facilitate work of contractors, we have thrown out all provisions which caused disputes and caused contractors a lot of pain and loss. NHAI took meetings with MDs of contractors and concessionaire companies and based on an honest dialogue, problems in highway construction have been addressed. This has resulted in the record road construction of 37 kilometre per day last year.”

Chairperson, NHAI, Alka Upadhyaya informed that NHAI is developing multiple facilities and allied infrastructure, in line with the Prime Minister’s vision for promotion of integrated infrastructure under PM Gati Shakti National Plan.  “The new thrust is on development of allied highway initiatives like MMLPs, last-mile connectivity through ropeway projects, fibre cables and other infrastructure along National Highways. Almost 8,400 state-of-the-art greenfield expressways are being built as part of Bharat Mala Pariyojana. These corridors will change the face of National Highways infrastructure and also supercharge the economy to a 5 trillion-dollar economy” she said,

Today’s National Conference in Mumbai was attended among others by potential investors, industry leaders and experts.

Relaxation on levy of additional fee in Annual ROC filing