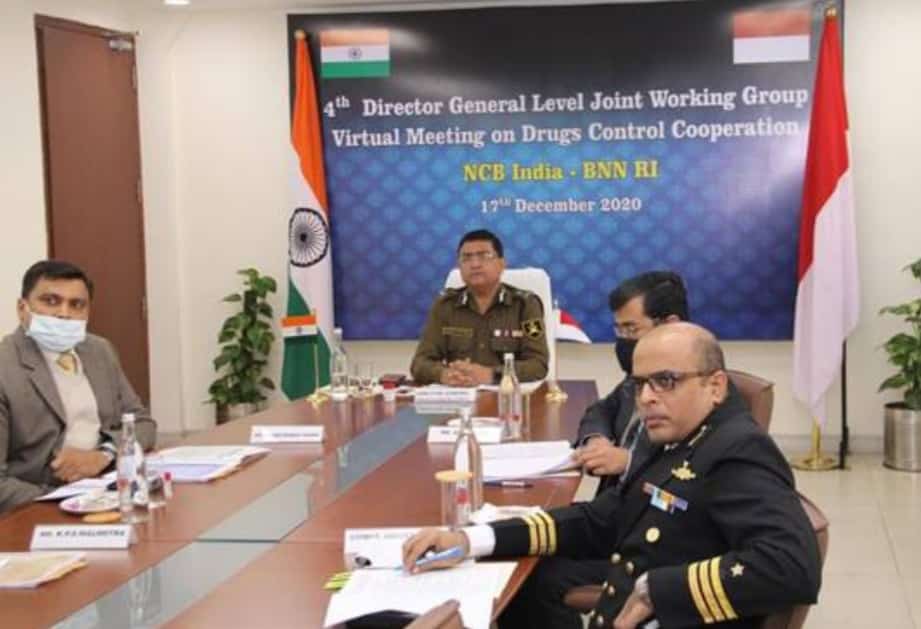 Fourth Bilateral Joint Working Group, JWG meeting between the Narcotics Control Bureau NCB India and the National Narcotics Board BNN, Indonesia was held today. The Indian delegation was led by Director General, Narcotics Control Bureau, Rakesh Asthana and the Indonesian delegation was led by Deputy of Legal Affairs and Cooperation, National Narcotic Board of Indonesia, PujiSarwono. Mr Asthana highlighted issues particularly the trafficking of Heroin and Amphetamine Type Stimulant ATS in the country through land and maritime routes originating from the Golden Triangle.

He also mentioned the new emerging challenge of trafficking of drugs through the Bay of Bengal and the Andaman Sea. He also emphasized on the emerging trends in the production and trafficking of New Psychoactive Substances and usage of Darknet markets. He said, COVID-19 has brought new challenges for containing the sudden spurt in trafficking through courier and parcel. He ensured that the Government of India is committed towards strengthening the existing mechanism of coordination and cooperation with Indonesia in combating drug trafficking. Mr. PujiSarwono elaborated the growing threat of trafficking of Methamphetamine in Indonesia, which has caused grave concern in the region even though the cooperation mechanism between Indonesia and India has enhanced over the past years.

He urged India to develop frequent information exchange on drugs trafficking and precursor smuggling activities at every level. He complimented the Government of India and the NCB for their continuous efforts to combat the growing threat of the drug menace. Both the countries agreed on exchange of intelligence information in a timely manner to conduct follow-up investigation in drug seizure cases, New Psychoactive Substances and their precursors. It was decided to exchange information on illegal entry and exit points of illicit drug trafficking on the Indonesia-India borders and information on technology being used to interdict drug trafficking.