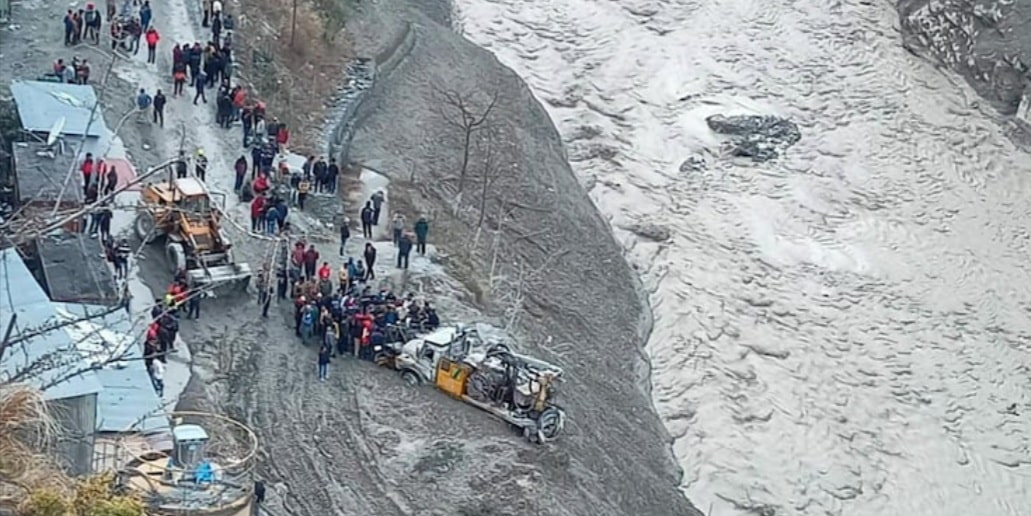 In Uttarakhand , a massive flood has been reported from  Chamoli district  where the water level in Dhauliganga river rose suddenly following an avalanche near Rishiganga Power Project at Raini village in Tapovan area of the district.

The flooding due to avalanche has destroyed houses situated at the river bank side. Several people working at Rishi Ganga hydroelectric power project were reported missing soon after the incident. According to reports, a dam of the Tapovan power project was breached and is feared to have washed away.

Teams of ITBP and SDRF personnel have rushed to the affected areas to rescue the villagers and locals. Meanwhile, the rivers in the region witnessed flash floods soon after the glacier broke. Following the glacier breach, a massive flood was witnessed in Dhauliganga near Reni village, where many riverbank side houses were flooded, Though the impact of the disaster may not be felt in Rishikesh and Haridwar, the towns have been put on vigilant.

The State Disaster Management Authority, Dehradun says that seven bodies have been recovered so far from Raini, Biraji, Alakapuri and Chchinaka villages. Out of 150 reported missing people, twelve persons have been rescued so far.

The flash flood due to the avalanche has destroyed houses situated at the river bank side. Five bridges have been damaged along with the residential and office complex of NTPC. The water level of Alaknanda river has stabilized. Teams of NDRF, SDRF, SSB, ITBP, and Defense personnel are actively participating in the rescue and relief operations. The Indian Air Force has also deployed its Choppers for rescue operations. Two Army Helicopters are also kept on standby. Indo Tibetan Border Police Force spokesperson said that more than 200 Javans are working in collaboration with local administration. Four Army columns, two Medical teams, and one Engineering Task Force have been deployed in Tapovan area. Though the impact of the disaster may not be felt in Rishikesh and Haridwar, the towns have been put on vigilant. The state government has issued helpline numbers for people stranded in affected areas. The numbers are- Disaster Operations Center number 1070 or 9557444486.