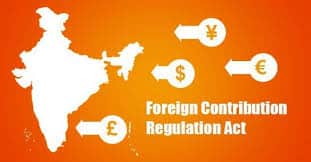 The Foreign Contribution (Regulation) Amendment Bill, 2020 was introduced in Lok Sabha on Sunday. The Bill seeks to streamline the provisions of the FCRA by strengthening the compliance mechanism, enhancing transparency and accountability in the receipt and utilisation of foreign contribution worth thousands of crores of rupees every year. The proposed amendments seek to bar public servants from receiving foreign funding. The amendments seek to make Aadhar mandatory for all office bearers of NGOs and other organisations which are seeking foreign contributions. Introducing the Bill, Minister of State for Home Nityanand Rai said, the Bill has been brought in the wake of Supreme Court order on AADHAR. He said, there are some NGOs which do not inform the government about the foreign contributions they receive. He added that some NGOs have been found to be violating norms by deviating from their objectives.